Yesplan has been acquired by Activity Stream. Read more

Yesplan On Tour is a roadshow where cultural venues can explore all Yesplan has to offer through practical tips and insights, while meeting and networking with other organisations.

By bringing our Yesplan webinars and demonstrations to the stage, we want to stimulate interaction and networking between Yesplan and cultural venues all around.
In this blog, we will tell you all about our successful Yesplan On Tour at Drammens Scener in Norway. 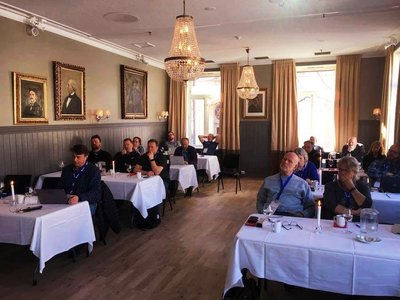 Since cultural giant Musikhuset from Denmark reached out to us, we took our planning software further up north. We started investing in our system to cater specifically to the Scandinavian market, which led to the Nordic regions warmly welcoming Yesplan. This was confirmed by the many attendees at our Yesplan On Tour in Norway.

Two invites by mail; that is all it took to bring 20 enthusiastic people from different cultural venues to Drammens Scener.

"Great questions, useful answers and interaction were the keywords during this demonstration, exactly how we like our YOTs."

The afternoon included an elaborate showcase of Yesplan’s tools and integrations and tips on how to successfully run a cultural venue thanks to planning and management software. During the demonstration, we clearly noticed our Norwegian audience nodding along when talking about increasing internal efficiency in a cultural organisation.

They indicated that they have the same needs as our customers in Belgium, the UK and the Netherlands:

Norwegian networking on the same level

During the networking afterwards, we met with the most interesting people and learned more about some admirable organizations.

There was a clear mutual feeling of understanding when talking about the vision of planning & management within an organisation. Meeting the people behind the venues showed us yet again that there is a great cultural fit between Yesplan and the Norwegian cultural scene, the Kulturhusene (Norwegian Cultural Centers), theaters and music venues included.

This obvious match between the land of the fjords and Yesplan, makes us very confident about future collaborations in the Nordic regions.

See you at Norske Kulturhus Fagkonferanse in Bodø!

News about Yesplan and the cultural industry, neatly packaged and coming to your mailbox on a regular basis.